A monster sunspot big enough it can be easily seen by a properly shielded naked eye, is brewing what strong solar storms.

Sunspots are active regions in the solar surface that look like dark spots. They are caused by intense magnetic activity and can cause flares and coronal mass ejections, or CMEs, which are known to threaten power and communication systems when directed to the Earth.

The sunspot known as AR 12192 appeared on the sun’s eastern side on Oct. 17 and since then was predicted to be enormous. Over the past few days, it has grown bigger and is now almost 80,000 miles across, or about the size of planet Jupiter, the kind that has not been seen for a long time. The AR 12192 is so far the largest of the current 11-year solar cycle that started six years ago in January 2008.

The monster sunspot, which is currently being monitored by NASA’s Solar Dynamics Observatory (SDO), has already spewed X-class flares one on Oct. 19 and the other on Oct. 22 causing high frequency radio blackouts. X-class flares are categorized as the most powerful of solar flares and they are associated with solar radiation storms particularly if they come with CMEs.

AR 12192 has not directed CMEs to the Earth’s direction so far but it has already produced several flares include two X-class flares, eight M-class flares, which are of medium strength, and 27 less powerful C-class flares. The X1.6 flare it spewed on Wednesday, created a very bright eruption in the lower corona of the sun, which was captured by the SDO.

“So far, this active region – labeled AR 12192 – has produced several significant solar flares,” NASA said. “Active regions are more common at the moment as we are in what’s called solar maximum, which is the peak of the sun’s activity, occurring approximately every 11 years.”

Forecasters from the National Oceanic and Atmospheric Administration (NOAA) predicted on Friday of more solar flares with 95 percent probability that the sun will spawn M-class flares and 55 percent odds of X-flares within the next 24 hours.

“So far none of the CMEs associated with these events are expected to be geoeffective, however, forecasters will keep an eye out for both CME activity and solar radiation storm possibility as the region approaches center disk,” NOAA’s Space Weather Prediction Center said in a statement.

The largest sunspot recorded was spotted in 1947 and this was nearly three times as big as the AR 12192. 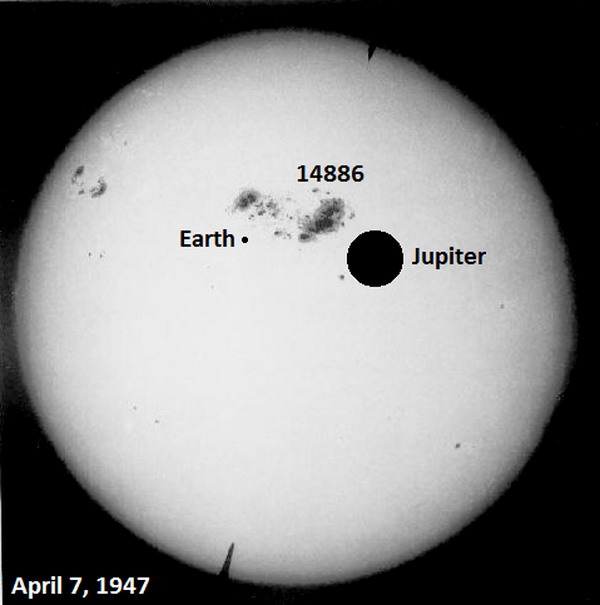 The largest film-recorded sunspot was on April 7, 1947. The size of this sunspot dwarfed Earth and was lager in extent than Jupiter, which itself is 11 times larger than the Earth. This active region (A.R.) 14886 was in fact 3 times larger than A.R. 12192.